Another award for French restaurant in Ponte Vedra Beach 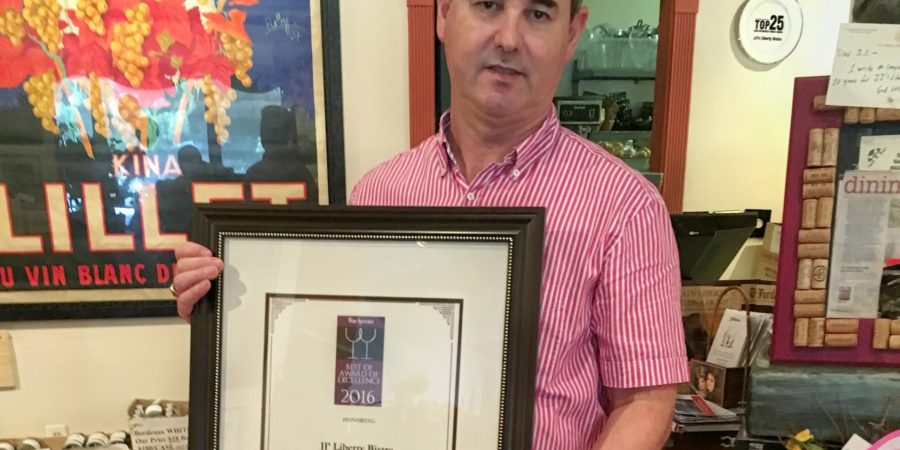 In a letter to JJ’s Liberty Bistro dated July 1, 2016, Wine Spectator Magazine Editor and Publisher Marvin R. Shanken stated, “Since 1981, our wine list awards program has honored the world’s best wine lists as a way to encourage restaurants to continually improve their wine programs and to connect them to our wine-loving readers.”

Proudly displaying his framed Wine Spectator Award Certificate on July 14, JJ Vigoureux of Ponte Vedra reminisced about the decades-long path that has led him to national recognition as a restaurateur and wine connoisseur.

After graduating at age 22 from the Culinary Institute of Bordeaux, France, with a masters degree in Restaurant Management, Vigoureux accepted a job at the Horseshoe Bay Country Club near Stonewall, Texas. The club happened to count among its members the family of President Lyndon B. Johnson and even after Vigoureux moved from Texas to Ponte Vedra, he maintained close ties with the Johnson family.

Many years later, when Lady Bird Johnson came to Mayo Clinic in 1998, she paid a visit to JJ’s Liberty Bistro in Ponte Vedra Beach and wrote him a letter of appreciation for the delicious dinner she enjoyed there. That letter is framed and hanging on the wall of the popular Ponte Vedra restaurant, along with other commendations such as a Certificate from France’s Minister of Agriculture naming JJ a “Knight of Agricultural Merit” … one of only 82 in the entire United States.

Married for 31 years to Benedicte, Vigoureux and his wife have three sons, Matthieu, Alexander and Augustin. Their son, Matthieu Vigoureux, 26, is the general manager of their second restaurant, JJ’s Bistro de Paris, opened 12 years ago on Gate Parkway in Jacksonville. Over the past two decades, the French wine list at JJ’s Liberty Bistro has gained such a stellar reputation that the restaurant supplies wine dinners at Sawgrass Country Club, Marsh Landing and Ruth’s Chris, to name a few.

Vigoureux, a devout Catholic who serves as a Eucharist Minister at Our Lady Star of the Sea Catholic Church in Ponte Vedra, gives God the credit for his success. As he bustled around his restaurant on July 14, preparing for a special three-course meal in celebration of Bastille Day, Vigoureux was excited to share the news that the membership of the Alliance Français de Jacksonville (French Alliance of Jacksonville) would be there that evening.

Sadly, by the time the Bastille Day dinner was being served at JJ’s Liberty Bistro, tragedy had occurred in Nice, France when a refrigerated truck plowed through a crowd, killing 84 people and injuring dozens more. Before joining together to sing the “Marseillaise” (French National Anthem), restaurant goers at JJ’s Liberty Bistro were led by Honorary French Consul Francois Kloc in a moment of silence honoring those who perished on this famous French day of liberation.

Later, commenting on the Bastille Day tragedy, Vigoureux said, “We cannot dwell on the past. We must look at today and tomorrow, put our faith in God, and keep praying for peace.”